The impact of the novel coronavirus pandemic has taken on an even deadlier toll in the northwest suburbs. CCX News has confirmed that the number of resident deaths at the St. Therese of New Hope senior campus has risen to 47 people. It’s the deadliest outbreak of any congregate senior care setting in Minnesota.

“This has been devastating to a community that prides itself on providing quality, loving care,” said Barb Rode, St. Therese’s CEO and president, in a statement to CCX News.

The outbreak impacted the 258-bed nursing home of the campus. St. Therese also has separate buildings for assisted living and independent living. Among the residents at the nursing home, 130 have tested positive for the novel coronavirus, St. Therese confirmed to CCX News. Meanwhile, St. Therese says 65 of its staff members have exhibited symptoms or had been exposed to ill residents.

According to St. Therese the first resident tested positive for the virus on April 5 and the first two deaths were on April 6.

“In fact, our efforts to prevent the spread of the virus started a month earlier, when we shut down the 258-bed skilled nursing facility to visitors, vendors and partners,” said Rode.

St. Therese of New Hope: One-third of Residents Were Asymptomatic

Since the first positive case, Rode says St. Therese has done everything it can to prevent the spread of the virus. The Minnesota Department of Health provided St. Therese an infection control specialist and audited the facility twice since March 31, Rode said. 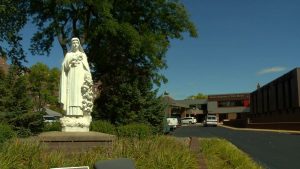 “We received reports of no-deficiency – one written and one oral – following these audits, meaning we were found in compliance with our license,” she said.

All St. Therese residents have been tested for the virus, Rode said, and the facility expects results on the final 25 residents in the next few days.

One reason the spread has impacted St. Therese so greatly is because many residents that tested positive didn’t show symptoms. Roughly one-third of the positive cases were asymptomatic, Rode said. That meant that before the results, residents were living with a roommate and among others in a potentially contagious state, unbeknownst to them or anyone else, she said.

“Identification of so many cases, symptomatic and otherwise, created a massive room transfer challenge for us,” said Rode. “Per CDC and MDH we moved all virus-positive residents together into unit and wing cohorts to prevent infection of others and to conserve personal protective equipment for our staff.”

Rode says staff members who exhibited symptoms were sent home on quarantine until they recovered and were cleared to return, per MDH and CDC guidelines.

Most of State’s Deaths in Long-Term Care Settings

According to MDH figures released Wednesday, 249 of the state’s 319 deaths have been persons in long-term care congregate living settings. 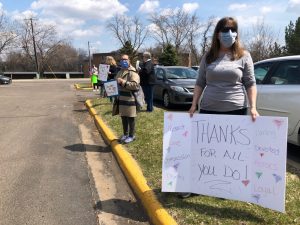 “The number of cases is not necessarily a function of whether a facility is following guidance or not,” Ehresmann said.

“It’s an extremely stressful environment to work in,” said Dr. Lynfield, state epidemiologist. “We can’t put a bubble around them.”

Lynfield noted that many long-term care facilities were already dealing with staffing shortages before the pandemic occurred.

“Only one family asked to move their relative from the facility after hearing of a positive test,” Rode said in the statement. You can read the full statement here.

“Residents are often frail, some with dementia.  Their care is challenging in optimal conditions, which these were not,” she said. “The disease doesn’t behave like influenza, which can be treated prophylactically and its spread more obvious and readily confined. Now that everyone has been tested for coronavirus, separation of those testing positive and negative – the first and most effective line of defense – will be much easier to accomplish.”