All were first violations within a three-year time period, except for one, Maple Tavern, which had its second violation.

The Maple Tavern bartender who made the sale wrote a letter to the city council apologizing for the mistake.

“Our customers are our most important asset and seeing their faces everyday makes going to work worthwhile,” read Brandt Erwin, attorney representing Maple Tavern, who read the letter on the bartender’s behalf. “I terribly regret the mistake I made and it would hurt me knowing the mistake I made will affect everyone else employed by Maple Tavern.”

Erwin urged the city council to consider only a fine for Maple Tavern and not a license suspension, saying the pandemic has had a painful impact on businesses.

“Maple Tavern is not minimizing the violation that occurred,” Erwin said.

“The other negative consequence isn’t just the servers and the employees suffer,” said Maple Grove City Council member Judy Hanson. “But an individual that is underage and comes in, and maybe drinks and is overserved, and then goes out and causes a car accident or something worse in our community, those are the reasons why there’s consequences.” 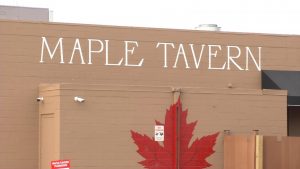 Business restrictions due to the COVID-19 pandemic were fully lifted May 28, and restaurants  have been trying to work their way back since. Eliane Strouth, owner of Grill Hall Brazilian Steakhouse, explained to the council how difficult it has been to get good help.

Strouth says she was working in the kitchen when the underage sale occurred.

Other businesses that failed compliance checks were Ichiddo Ramen, Bonchon Chicken, Portillo’s and Princeton’s Liquor. Each received a $2,000 fine and a 2-day liquor license, except Princeton’s Liquor which just received a fine. Maple Grove’s ordinance allows businesses with off-sale licenses to possibly avoid a license suspension on a first offense.

Maple Tavern received a 5-day license suspension and a $2,000 fine.