An announcement in the Minnesota legislature Friday will have implications all the way to November. Senator Paul Anderson, R-Plymouth, who represents the cities of Plymouth and Minnetonka, announced he will not seek re-election.

Anderson, a Republican, has represented Senate District 44 since 2017. He currently chairs the Senate Higher Education Committee. He also serves on the Taxes Committee and the E-12 Finance and Policy Commitee.

“Serving the interests of others has been a calling, honor, and labor of love my entire professional life, and a tremendous blessing these last three years representing the wonderful people of Senate District 44.

“However, after nearly two decades of public service, my personal and professional life require greater attention than serving in the legislature and a demanding year of campaigning currently allows,” he said in the statement. 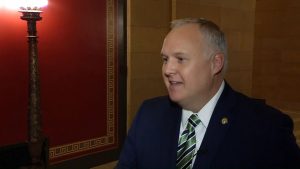 Sen. Anderson during an interview with CCX News

The Senate District 44 seat is expected to be a top target of the DFL Party. Anderson defeated DFL opponent Deb Calvert by a mere 195 votes in 2016 following a recount.