Teachers have a variety of ways to get a lesson across to students, but when you’re a music teacher trying to teach kindergarten students about famous composers, a simple lecture won’t quite do the trick. 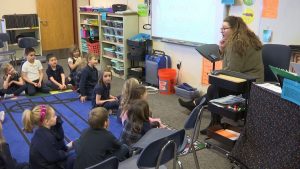 “I’m a big believer in play in the classroom,” said Allie Kroehler, a music teacher at St. Vincent de Paul in Brooklyn Park. “I really think that kids, especially in kindergarten, need to move their bodies quite often. They cannot sit still for very long.”

During a recent lesson on music history, Kroehler used movement to get her point across. The idea is that the children in her class will associate a movement with the word or sound she wants them to remember.

“The craziness that was that lesson is usually what it looks like in here,” Kroehler said. “But I think if they’re having fun, they’re probably learning something too.”

Encouraging Kids to Fall in Love with Music

Ultimately, the hope is that these kindergarteners will fall in love with music.

So far, her work is paying off. For example, the choir she directs has grown by ten students.

“I think something really cool about our choir here is we sing at our weekly masses,” Kroehler said. “And I think it’s a really awesome way for them to be able to give back to their community and showcase their talents, but also provide this service in the form of music.”

However, choir isn’t the only fine arts program experiencing growth.  The same can be said about the school’s band, orchestra and musical theater programs, which are run by Totino-Grace High School.

“For the musical, we got to perform in [Totino-Grace’s] space, which is awesome because we don’t have a theater here,” Kroehler said. “So getting to perform on a real stage was just so awesome for those kids. And just getting the expertise from a high school level director is really, really beneficial for them.”

It’ll be a while before the kindergarten students at St. Vincent de Paul are at the level where they can perform in a musical, but Kroehler is laying the foundation to help them get there.

“There’s a lot of passion from our students here and I think it’s super awesome that we have so many vehicles to express that passion,” Kroehler said.