The Brooklyn Park Salvation Army opened a food pantry this summer. But the food shelf is strained by skyrocketing demand.

Volunteers were busy stocking the shelves early Thursday morning. The pantry has been helping families stretch their food budgets during the pandemic.

Officials say the demand for the pantry has increased over the past few months. 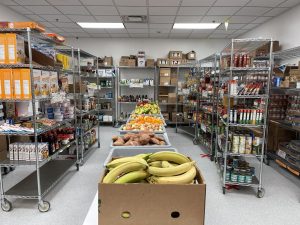 “We’ve gone from 15 families a week to almost 300 a week. So, the need is there, and people are using it more frequently,” explained Josh Polanco, Salvation Army Auxiliary Captain.

But the group is making what could be an uncomfortable situation as straightforward as possible.

“There’s a definite need in Brooklyn Park, but I think there is a stigma and just maybe families feeling embarrassed to seek out the help,” said Polanco.

People can shop for their food on their own or do curbside pick-up. The organization also offers pre-packaged bags.

“We’re seeing people now coming through the Salvation Army maybe before would have never walked in our doors,” said Polanco.

And the global supply chain shortage is impacting the food shelf. Some items they can’t get, and they’re paying more for food.

The Salvation Army says although the demand is high, they hope to continue serving the community. Contact the organization if you want to donate or volunteer at the food pantry.