Every once in a while, a food craving comes along that someone will do anything to satisfy.

In the case of Lynda Sigwanz, that meant making a 25-minute drive from Andover to Brooklyn Park with her two sons for poke bowls.

“Shrimp tempura, you know, can’t be beat,” Sigwanz said. “It’s worth the drive.”

The restaurant benefiting from her craving of seafood, rice and vegetables is Rolls & Bowls Asian Cookhouse. It’s an Asian fusion restaurant in Brooklyn Park’s Park Place Promenade that opened in September at the site of a former Pita Pit. 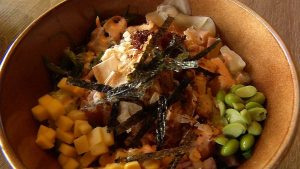 “The customer tell me, ‘Yes we like it, because this is the type of food we’re looking for here in Brooklyn Park,’” said Linh Huynh, the owner of Rolls & Bowls.

“So far, it’s good,” Huynh said of the customer response. “People adapting to it and they like it.”

Rolls & Bowls is one of roughly a hundred restaurants people can choose from in Brooklyn Park. Some of the other new options include, Panera Bread, which opened last week near Highway 610. And on February 20, Chick-fil-A will open nearby along Zane Avenue.

Yet there’s a popular perception that the city lacks dining options.

“Anyone that says there’s not enough restaurants here, they’re just not looking around and they’re just not checking the area out enough,” said Natalie Conrad, public relations and communications manager for Minneapolis Northwest Tourism.

“There’s always something new coming, and the great part about that is, it’s a lot of locally-owned restaurants, and a lot of different types of food too,” Conrad said. “It’s not always American. It’s kind of all the flavors of the world you can experience here.”

Restaurant variety may not have always been Brooklyn Park’s strong suit, but Linh Huynh is doing her part to change that.

“Hopefully, most of the people [come], and they come back again,” she said.

Huynh is already starting to build up that loyalty.

“There’s lots of great restaurants coming up, and this is one of them,” Sigwanz said.

A new El Loro Mexican Restaurant will be moving into the former Applebee’s on Brooklyn Boulevard. Also, Vietnam House will be taking over a vacant space next to its current location.