Big changes are on the way in the Robbinsdale School District over school start times.

In December, the Robbinsdale School Board voted to change school start times.

The goal is to move Armstrong and Cooper High schools to a later start time. Officials point to sleep studies as one reason for the change. Transportation costs are another reason.

The board passed the following scenario by a vote of 5-2. 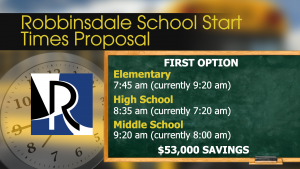 The district has put together a subcommittee of parents and community members to discuss the options.

Note: The previous story was incorrect in that it said the School Board still had to vote on one of two options for start times. We apologize for the error.