Charges were filed Wednesday against a Minneapolis man suspected of breaking into garages in Robbinsdale and stealing property. Isaiah Juaquin Washington, 29, is charged with illegal possession of a firearm and fleeing police in a motor vehicle. Additional charges for burglary are likely.

According to the criminal complaint, officers were dispatched to the 3700 block of Perry Avenue North to investigate a burglary. Police noticed an open door to a detached garage. They learned the homeowners were out of state and the garage should not have been accessed.

Officers also noticed shoeprints in the snow leading to other garages and a stolen Volkswagen filled to the ceiling with items typically stored in garages along with a loaded firearm on the front driver’s seat.

After tracking the footprints in the snow, police spotted Washington moving between garages and carrying a plastic bag filled with property, the complaint said. The suspect took off running, eventually making his to the Volkswagen.

The complaint says Washington drove in reverse down an alley at a high rate of speed. He then entered nearby roadways traveling at speeds exceeding 60 miles per hour, the charging document said. Eventually, the suspect crashed into a utility pole several blocks away.

Officers again followed the same shoeprints that led to another detached garage. He was found inside and was arrested. A Robbinsdale resident told CCX News that he saw the police activity and said the standoff with the suspect lasted about an hour.

Police believe Washington may be responsible for as many as 20 garage burglaries. Robbinsdale police recovered stolen property that included chain saws, electric drills, jewelry, even a guitar. A significant amount was found inside the suspect’s stolen vehicle 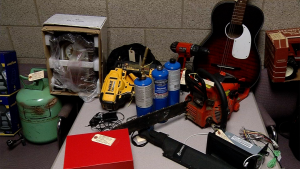 A Robbinsdale resident captured video as police arrested the burglar early Tuesday morning. He had seen police cars come down the alley near his home. He then saw someone break into a neighbor’s garage attempting to hide. The suspect standoff with police lasted for about an hour. Now police are working to return stolen items to their rightful owners.

“We’re trying to figure out as many people as we possibly can,” said Robbinsdale police office Casey Landherr. “We will be reaching out to other law enforcement agencies, seeing if it might hit on a case that they have, that the property we are currently in possession of might have already been reported through other means.