A new era is about to begin at the Robbinsdale Police Department. After a rigorous vetting process, the city council named a new police chief on Tuesday night.  Patrick Foley is a 22-year public safety veteran and has spent his career serving Robbinsdale. He was first hired in 1998 as a community service officer and quickly rose through the ranks, working as a patrol officer, investigator, sergeant, and captain. However, he’s served as interim chief since August.

Foley has a wife and two daughters and enjoys the theater and traveling. He’s also volunteered in Trinidad and Kenya, researching endangered species. 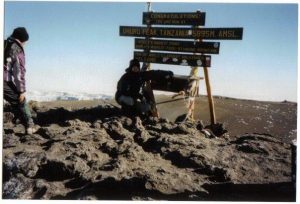 The top cop also climbed to the summit of Mount Kilimanjaro. Smiling, he said, “Truly one of the most physically challenging things I’ve ever done in my entire life.”

Here at home, he’ll have to scale a different type of mountain. This summer, several rallies were calling for more transparency and trust within the police department.

Community Outreach Is A Top Priority

The new chief is making community outreach a priority. A new team of community service officers will work to open the lines of communication better. The department is also working with a group called “Bring The Community and Police Department Back Together.”

Foley was recognized during the October 20th City Council meeting.