“Normally we can get a house done in a day, depending on the size of the home,” said Couet, of CR Solar. “Typical rambler, eight-hour job, and we’re out.”

But the home he’s working on isn’t a typical rambler, or an ordinary roofing job.

It’s the Robbinsdale home of Mayor Bill Blonigan, who decided that he wanted to make his home more environmentally-friendly by installing solar panels.

Forty-eight of them to be exact.

“We will save money in the future,” Blonigan said. “Electric rates will go up 14 percent next year. We won’t be participating in that, because we’re going to have our electricity made right here.” 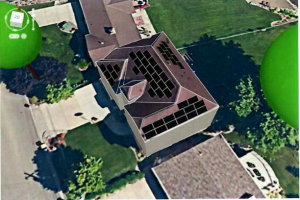 A rendering of what Bill Blonigan’s roof looks like with the solar panels.

Blonigan says this particular array of solar panels has a price tag of $58,000, but the cost is offset by a $15,000 federal tax credit and a solar rewards program through Xcel Energy that will provide another $13,000 in exchange for the energy produced by the solar system.

As for the remaining $31,000, Blonigan will eventually pay that off in energy savings.

“The payback is almost instant,” he said. “So once I saw this program that Xcel energy has, and the federal tax credit, which will go down a little bit in the future, I thought now is the time to jump on this.”

Blonigan isn’t the only one jumping at the opportunity.

The crew from CR Solar says their schedules are booked, in large part because of the benefits offered by Xcel Energy.

Granted, Minnesota isn’t exactly the sunniest place during the winter months, but Couet says that shouldn’t be a deterrent.

“A lot of people think during winter they’re not going to get any energy,” Couet said. “That’s not the case. Even under snow, these panels produce energy, and typically you build up enough energy credits during the summertime that it’s going to be beneficial for you well into the winter.”

Yet in the end, Blonigan says the real beneficiary will be Mother Nature. Now, he hopes his neighbors follow his lead.

“You can do it and it doesn’t cost anything to listen to a presentation from one of these companies,” Blonigan said.