“A lot of people in Minnesota, more than 650,000 people every year use cannabis,” Winkler said. “Because they are adults who want to make their own responsible decisions knowing the risks.”

Winkler and a group of lawmakers recently crisscrossed the state to gather feedback on the issue. They stopped in 15 cities to gauge interest in making cannabis legal.

According to Winkler, many Minnesota residents believe the state’s cannabis laws are doing “more harm than good.” 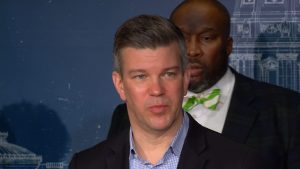 Ryan Winkler: Legalizing Cannabis is “Just a Question of When”

Ryan Winkler is one of the key politicians behind a bill that would regulate cannabis in the marketplace. The bill would also focus on public health, safety and criminal justice reform for those unfairly impacted by marijuana enforcement. However, it would likely face opposition in the Republican-led Senate.

“We are preparing for that change by creating legislation that will address all the harms of our existing prohibition of cannabis,” Winkler said. “We’ve seen this on issue after issue. Senator Gazelka and Senator Limmer can fold their arms and say no they don’t want to hear it. But the people of Minnesota will roll over them eventually on issues like this. They can decide to be speed bumps, or they can decide to be active participants in correcting policy.”

The Minnesota Senate vetoed the bill last session. Marijuana use is now permitted in 11 states and is legal for medical use in 33 states.

Winkler and his political cohorts are studying places where marijuana is legal to see what those states have done right and wrong in the process.

Osseo Schools Impacted by Rising Diesel Prices:  The price at the pump for gas and diesel continues to… Read More
Dog-Friendly Brewery Pass Raises Money for Animal Humane Society:  Not only does a portion of every… Read More
Greenwood Elementary Students Prepare for First 5K Run:  At Greenwood Elementary in Plymouth, about 40… Read More
Golden Valley Firefighter Prepares to Climb Allianz Field Stairs:  A Golden Valley firefighter will be… Read More
Lawmakers Still at Odds Over Public Safety Solutions:  With the legislative session winding down at… Read More
Maple Grove Family Desperately Seeks Baby Formula:  Many parents across the northwest metro are… Read More