Rep. Freiberg on Conversion Therapy Ban Bill: ‘I Will Be Proud to Vote for It’

Freiberg, a DFLer from Golden Valley, joined Rep. Patty Acomb, whose district includes southern Plymouth, as local representatives on the committee who voted for the bill. The vote on the bill, House File 2156, was 7-4.

The LGBTQ community and mainstream medical groups have denounced conversion therapy for children and young adults saying it causes severe psychological harm in an attempt to change a person’s sexual orientation.

Aubrey Dobson was among those who shared their personal stories to the committee. Dobson says she was forcibly removed from her home as a child to undergo treatment for 10 months. She says she suffered psychological and physical torture.

“I can tell you definitively, as I am now married to a wonderful woman named Kate, that that therapy was not successful, but did result in 13 years of actual talk therapy to recover from the torture that I received as a child,” said Dobson.

Despite the moving testimony, there was opposition to the bill with one religious organization calling support for it “LGBTQ jihad” and an “attack on parents.”

So far 20 states and 75 cities have banned the practice of conversion therapy. Rep. Athena Hollins, chief author of the bill, said it does not affect religious or individual prayer practices, but only applies to paid services rendered.

Testimony submitted during the hearing said there are nearly 30 organizations in Minnesota that conduct conversion therapy and 86 therapists doing the practice with 34 of those being licensed mental health professionals.

Rep. Freiberg, whose district also includes portions of New Hope, Crystal and Robbinsdale, was elected in 2012 when the same-sex marriage amendment was defeated. The next year, the Minnesota legislature voted to legalize same-sex marriage in the state.

“It seemed like we were moving in the right direction in terms of acceptance,” said Freiberg. “Based on the testimony we heard today and hearing about what people have gone through, it’s clear that we have a long way to go.”

Added Freiberg, “As Rep. Agbaje put it very well, you are beautiful the way you are. That’s why this bill is so important, why I co-authored it, and why I will be proud to vote for it.” 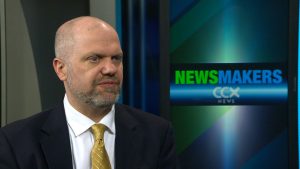 Rep. Mike Freiberg in a recent interview with CCX News.