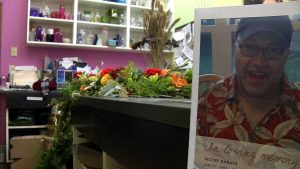 The family and friends of Victor Donato remember his big personality and his creative talent. He operated a floral shop with his sister Anna and other family members for almost thirty years before he had a heart attack and passed away unexpectedly four years ago.

“It was a bad morning, that’s all I can say,” says Anna Donato-Ghani, who still operates Donato’s Floral. “It was very traumatic. He passed away in an ambulance going to North Memorial Hospital.”

The tight-knit family channeled their grief into remembering Victor.

“That’s how we started the foundation,” explains Anna. “You start to put your energy and love into something to keep them in the light and keep them alive.”

The Victor Donato Memorial Foundation would raise money to revamp Hollingsworth Park. Victor had known the family and he supported the ambassadors who are crowned every year in the park.

“It’s a beautiful park, but I think we can enhance it and make it more beautiful for years to come,” says Anna. “When you change something you also bring attention to the park. You are bringing in the light and explaining who this man was, he was a firefighter who lost his life.”

So far the Victor Donato Memorial Foundation has raised more than $16,000 for the first phase of the park project. They have more ambitious plans and continue to raise money for more landscaping, some artwork and possibly a pergola.

There aren’t any plans yet for a plaque or anything to pay tribute to Victor Donato in the park and Anna says that’s fitting because it’s the way Victor would’ve wanted it.

“What he lived for is standing back and hearing people say ‘wow, that’s beautiful,” says Anna. “So, stand back, look and marvel at the beauty and he’ll be happy.”