Joy Robb, who served as Robbinsdale’s mayor in the late 80s through the mid 90s,  passed away Monday. She was 85 years old. Since then, city leaders have been reminiscing about her life. Not only a former 2-term Robbinsdale mayor, Robb also served as chair of the Robbinsdale School Board as well as belonging to a large number of civic organizations including PRISM and the Minnesota Center for Women in Government.

One change she made in city council meetings that’s still done today was instituting open-mic sessions just before council meetings. They allow citizens to speak to the council on any topic, whether it’s on the agenda or not. 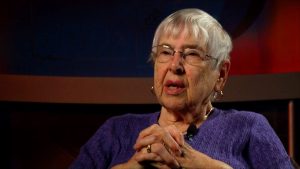 Robbinsdale city council member Bill Blonigan was on the council during Robb’s terms. He remembers her as being very kind. “She was Mother Robbinsdale,” Blonigan says. “If there was a difference of opinion, much like all the people I’ve served with, there was no grudge-harboring after the fact.”

City Manager Marcia Glick was thinking of leaving her post for another position when Robb took office. Glick says Robb encouraged her early on.

“Joy was very special to me,” says Glick. “When I had first started in Robbinsdale, she encouraged me to stay in local government, and stay put and grow in Robbinsdale and be a leader. The way she was.”

Robb’s memorial service will be held January 20th at Brunswick United Methodist Church, where she was a founding member.