Brooklyn Center Little League had just overcome a bad break last winter when water pipes in the bathroom froze, creating a mess and a huge bill.

“They ripped down the divider curtains, started the shower curtains on fire. They tried starting the shelves above the wall on fire,” said coach Jason Brenny pointing to the damage.

Children who came to fields Friday to practice also noticed the damage.

“I think it’s really sad because I don’t think anybody should be doing this to the field,” said player Adrienne Carbin.

“It makes me sad because people take advantage of our fields, and I don’t like that. I work hard here. So, it’s sad,” said pitcher Shelby Shocinski. 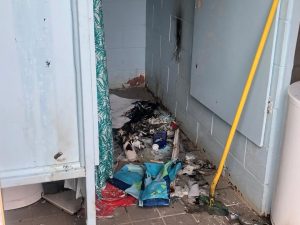 The Brooklyn Center Little League’s insurance policy doesn’t cover vandalism or theft. To make matter worse, the freezer at the concession stand also broke, so the league currently can’t make money off popular foods this season. Officials say it will cost about $20,000 to fix everything.

“You’re not stealing from adults. You’re stealing from 12, 10, and 5-year-olds. So, please stop,” said board member Jennifer Brenny.

No arrests have been made. A GoFundMe is set up to help defray costs. Donations can also be made via the Brooklyn Center Little League website.