Local police are investigating several recent shootings, where a significant amount of shell casings were found at the scene. Officials believe the shooters might have used a device that turns ordinary handguns into fully automatic weapons.

Brooklyn Park is considered a bedroom community with friendly neighborhoods with plenty of parks and bike trails, but often the peace and tranquility fades away when after it gets dark.

“At night is where we have most of our shots fired at, and it just turns into a different city,” explained Inspector Elliot Faust.

Faust says the second-ring suburb sees an unprecedented number of illegal guns on the streets.

“We recovered 69 handguns so far just this year in Brooklyn Park: 12 long guns, rifles, and shotguns,” he said. 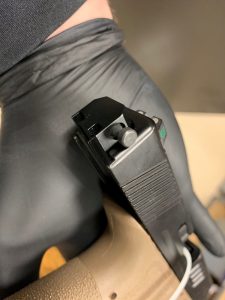 “An auto sear is a device that drops in or attaches to a rifle or pistol,” said ATF Special Agent in charge for the St. Paul Field Division, William J. McCrary.

He says the device converts a pistol or rifle into a fully functioning machine gun, allowing it to fire multiple rounds with one trigger pull.

“You’re going to fire at a rate of about 20 rounds a second,” said ATF Group Supervisor Cory Shelton.

His area includes the northwest metro.

“It’s becoming more common, even in the last year. I think the curve is in exponential. It’s very, very common,” said Shelton.

Experts say these types of guns are hard to control, making them dangerous for both intended targets and innocent bystanders.

Handguns or rifles modified with a switch are easy to get on the black market, costing about $100 to $200.

Police say some people also use 3-D printers to make the devices.

“A large percentage of what we’re seeing are coming from overseas, Eastern Europe or China,” said McCrary.

Auto Sears are legal for people to own, but they either have to have a federal firearms license or pay the NFA tax and register it with ATF. However, local law enforcement officials say many of these devices are getting into the hands of people who shouldn’t have them.

“We’re starting to see them. I know of one or two last year, and this year 2022, year to date, we’ve already got three of them,” explained Brooklyn Center Commander Garett Flesland.

He says police acknowledge a firearm with an automatic conversion device could have possibly been involved in a shooting at the Sonder House Apartments in July, where more than 100 spent bullet casings were found in the parking lot.

Meanwhile, Osseo police recovered eight firearms during a disturbance recently at a park. Three of those weapons had auto sears attached.

And in Brooklyn Park, at least three firearms have been recovered with auto sears so far this year. But officials think that number could be higher because the devices are hard to document.

“When one person has one, the next person feels like they need to have the same thing to compete, and when you’re talking street gangs, there’s an arms race going on our streets,” said Inspector Faust.

In July, Brooklyn Park police were called to Walmart for a shoplifter. The person had a warrant for his arrest. Police then found a fully automatic Glock in his waistband. 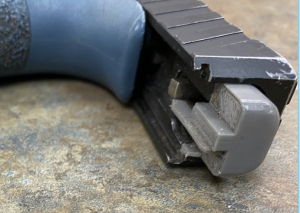 Handgun with auto sear found on an alleged shoplifting suspect at Walmart back in July,

“Think of that gun being capable of firing 17 rounds in a matter of three to five seconds,” said Faust. “You can do a lot of damage with something like that to a lot of different people in a very short period of time.”

Several things are being done to stop people from using conversion devices. The ATF is bringing in additional agents and teaming up with local, state, and federal law enforcement agencies to locate shooters and get the devices off the streets.

The punishment for having an auto sear starts at 10 years in prison and can go up depending on circumstances.

If you know of anyone in possession of an auto sear, or if anyone is selling the device,  call local police or the Bureau of Alcohol, Tobacco, Firearms, and Explosives.

Senator Amy Klobuchar has legislation about gun conversion kits. You can read it here.