In the northwest section of Brooklyn Park, Oak Grove Park is a go-to spot for outdoor enthusiasts.

Sayler also happens to live right by Oak Grove Park. It’s an area that now has beefed up security after an incident on the trail last Sunday where a man assaulted an 18-year-old female runner.

It’s one of the reasons why Sayler encourages her customers to be aware of their surroundings at all times and keep a few things in mind if they encounter a similar situation. 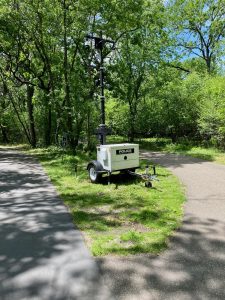 The Brooklyn Park Police Department has put up this mobile security camera near the area of the assault.

‘Get to where people are’

“If you can cause that person to be a little thrown back, that they’re not going to be able to take advantage of you, and then hop on your bike and run away as fast as you can,” Sayler said. “And get to a lighted area. And get to where people are. Maybe as soon as you come to the intersection, get off the trail and go to a house.”

These are things that Paula Pentel of Golden Valley thinks about whenever she hops on her bike.

“I’ve had people reach out car windows and hit me, you know, on the back or on my tush as I was riding my bike,” Pentel said.

Pentel is avid cyclist who bikes with a phone strapped to her chest and a light on her helmet.

But if she were ever assaulted on a trail, the first tool she’d use is her voice.

“I’d be loud. I think it’s really good to be loud,” Pentel said. “And to me, really take care of yourself, you know. And yell.”

While safety is something that people can’t take for granted, Sayler says that for people who frequent Oak Grove Park, one incident shouldn’t deter them from enjoying themselves.

Meanwhile, officials with the Three Rivers Park District, who oversee the trail where the incident occurred, say that Three Rivers Public Safety is assisting Brooklyn Park in their investigation and will be increasing patrols in the area.