Exercise is important at any age, but that’s especially true for older adults who want to maintain their strength and stamina.

“The exercise really loosens us up to a great extent,” said Marcia Copeland, a resident of Trillium Woods in Plymouth.

Once a week, Copeland and a specific group of residents at Trillium Woods meet for a fitness class.

“For starters, the aerobic activity helps to reduce the risk of heart disease, which is a No. 1 killer,” said Colleen O’Neil, fitness center manager at Trillium Woods who leads the class. 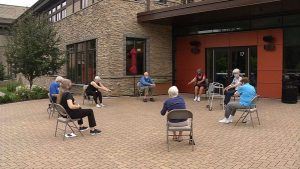 A Parkinson’s disease support group at Trillium Woods meets once a week for a specific exercise class tailored to their needs.

Yet heart disease isn’t necessarily the No. 1 concern of the people doing these exercises.

Each of these seniors has Parkinson’s disease, a nervous system disorder that affects movement.

“It’s a little bit like having the muscles not receive the message from the brain,” Copeland said. “You want to do something, and the muscles don’t cooperate with you, and you’re stuck.”

A program tailored to their needs

Copeland is part of a Parkinson’s support group at the senior living home. Last year, the group asked Trillium Woods to create an exercise program specifically tailored to their needs.

“Well, we knew that there were exercises that were better for Parkinson’s patients than they are for everybody else,” Copeland said. “Moving big, because we tend to make our movements smaller. We tend to trudge. We tend to not lift our feet as carefully as we should, and therefore we increase the risk of falling.”

And to help to improve balance, the class uses boxing movements where the participants call out the boxing combinations. That activity trains everyone to speak loudly, as the voice can become quieter with Parkinson’s. 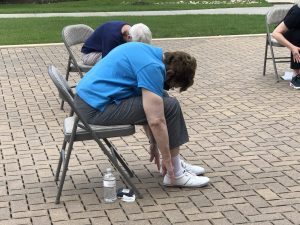 Marcia Copeland stretches as part of the Exercise for Parkinson’s program at Trillium Woods.

“There are different stages of Parkinson’s, and it can eventually make a person completely immobile,” O’Neil said. “So yes, it is very helpful to keep things from degenerating.”

Copeland says she’s seen a benefit since the program started in January.

“The big movements really help, because otherwise you’re finding yourself tightening up and getting smaller and smaller,” Copeland said.

Eventually though, the degenerative disease will take a toll on their bodies. But in the meantime, the Parkinson’s support group is putting up a fight and supporting one another.