A shooting on a highway in Plymouth Tuesday night has left one man dead. Now, investigators are looking for help locating the shooter.

“We believe there was some sort of traffic altercation between the two vehicles,” said Plymouth Police Chief Erik Fadden.

Around 10 p.m. Tuesday, Plymouth police say two vehicles were traveling southbound on Highway 169 when someone in a light-colored SUV shot at another vehicle, hitting the driver.

The victim’s vehicle veered off the road, went through a fence and slammed into several cars parked at the Manor Royal Apartments in Plymouth. 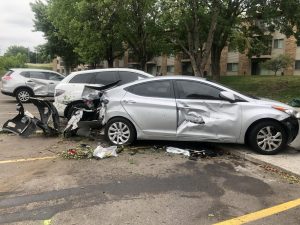 Parked cars that were struck after a driver was shot driving southbound on Hwy. 169 and veered off the road.

Police say the injured driver was taken to North Memorial Health Hospital in Robbinsdale, where he died.

“This was one of the most tragic events that I have witnessed in my 20 years of policing,” Chief Fadden said. “It was really, truly a senseless act that resulted in the loss of a human life, and our thoughts and prayers go out to the family, friends and those affected by this horrible event.”

Meanwhile, police say the shooter fled the scene and they’re still trying to locate that person’s vehicle. Investigators describe the shooter’s vehicle as a light-colored SUV, possibly a Chevrolet Tahoe, Suburban, or similar model. Investigators believe the vehicle has damage on the driver’s side rear bumper.

Police are hoping the public can help assist with information leading to an arrest.

“I’m confident that someone has some relevant information to this case,” Fadden said. “Whether you were just driving in the area along 169 around 10:00 [Tuesday] night or have some information relevant to any suspect vehicle.”

Investigators say they’re still reviewing surveillance video, but they’re asking anyone with any information to call the Plymouth Police Captain Michael Reed at (763) 509-5178. 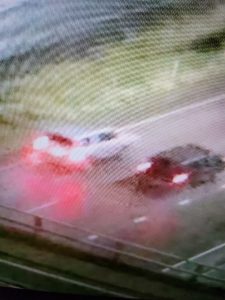 Surveillance photo of the vehicles involved in the shooting on Highway 169.