The city of Plymouth announced Tuesday that Plymouth Public Safety Director and Police Chief Mike Goldstein will retire in late January. He’s served the Plymouth community for 31 years and his last day of work will be Friday,  Jan. 29.

Among his accomplishments, Goldstein successfully advocated for getting cable median barriers installed on Interstate 494 and Highway 169 through Plymouth. He’s also credited with developing mental wellness initiatives for first responders and assisting in developing legislation to strengthen penalties for bringing weapons onto school campuses.

“Under Goldstein’s leadership, the Plymouth Police Department has earned a reputation among residents, community organizations and law enforcement agencies, both neighboring and nationwide, for steadfast service, progressive practices and professionalism,” said City Manager Dave Callister in a press release.

Goldstein was raised in Plymouth and started his career with the police department by joining the first class of Police Explorers when he was a senior at Armstrong High School. From there, he went on to be part of the first group of Plymouth Police Reserves. He volunteered while studying criminal justice and public administration at the University of St. Thomas. He started work as a full-time sworn officer in 1990, when the population was 30,000 less than it is today.

Goldstein became Plymouth police chief in 2004 and took charge of the fire department as well when he was named public safety director in 2015.

“I chose to work for and stay with Plymouth because it’s what I know – it’s about having roots in the community and serving family and friends,” Goldstein said in a press release. “But it’s mostly about the people I’ve had the opportunity to work with – these are the women and men I want to be with, and I’ve never taken that for granted.” 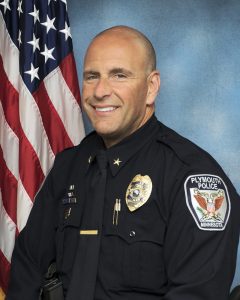