Plymouth Moves Toward One-Year Moratorium on Sale of THC Products

The city of Plymouth is moving toward imposing a one-year moratorium on the sale of THC products. A vote is expected at the next city council meeting.

The move comes after the city responded to two recent overdose cases. Plymouth police believe both incidents were unintentional.

In one case on July 11, police say a mother unknowingly gave her four children gummy candy containing THC, the main psychoactive ingredient in marijuana. The mother consumed some herself, not realizing what she had eaten.

“All five of these people were required to be transported by ambulance to local hospitals in three separate ambulances,” said Plymouth Public Safety Director Erik Fadden. “It was later determined by hospital staff that they all suffered from THC overdoses. It’s pretty concerning when they are 1 to 5 years old.”

THC edibles became legal on July 1 after the state legislature approved the sale of such products derived from hemp. No more than 0.3 percent of THC derived from hemp is allowed. In addition, the law requires products to contain limited amounts of THC — 5 milligrams total in a single serving and no more than 50 milligrams per package. Only people 21 and older can purchase them.

It’s up to cities to decide zoning requirements and licensing procedures.

“The new law does not prohibit local regulation, nor does it require cities to create local regulation,” said Plymouth City Clerk Jodi Gallup. “It’s unclear though if cities can prohibit the sale because there’s no opt-in or opt-out provisions in the law.” 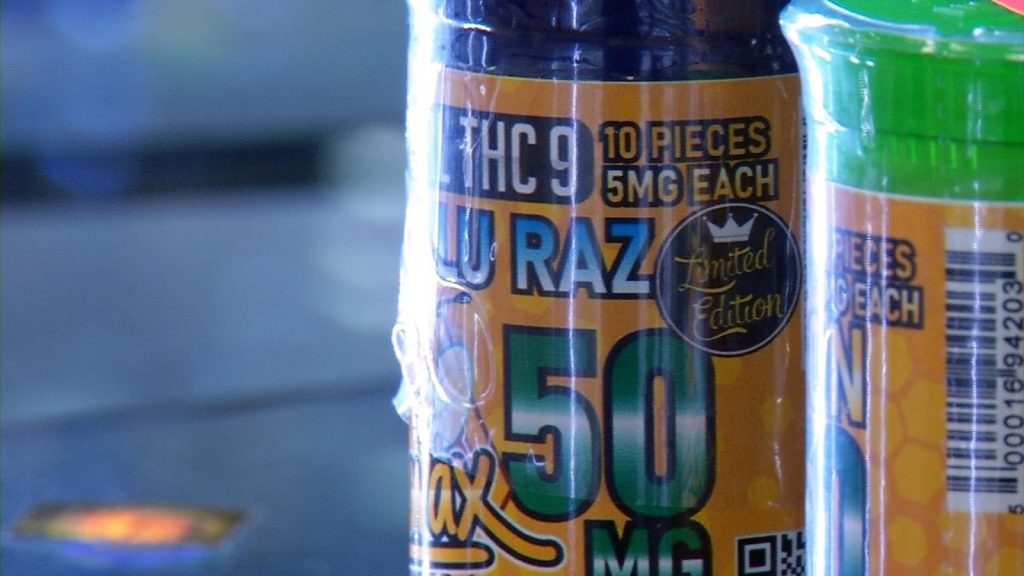 Police say it will make no difference whether the THC is derived from hemp or marijuana.

“I just see too many loopholes, with the current laws that are out there right now that will invite the illicit market into convenience stores,” said Todd Kloss, an officer with the Plymouth Police Department.

Kloss recently joined Plymouth after a sheriff’s office job in Oregon, where the sale of recreational marijuana became legal in 2014. He says it just takes more hemp than marijuana to create THC products.

“Essentially [the Minnesota legislature] legalized marijuana in some form or fashion because THC is THC, whether it’s from hemp or the marijuana plant,” said Kloss.

Plymouth police also say it’s difficult to test where the THC in products came from or how much THC is in them.

“We don’t have the ability currently to test or determine if THC edibles are derived from hemp or derived from marijuana,” said Fadden. “There’s also no measures in place to test the THC content of edibles or liquids currently.”

In Plymouth, four businesses are either currently selling or planning to sell THC edibles. The state law has led to frustration from council members.

“It appears our legislators have dropped a real load of a turd on us,” said Plymouth City Council member Jim Davis. “It’s barely regulated, hardly defined, no rules of the road. And we got to pick up the pieces.”