“It’s more common than not, that people aren’t cleaning their cans,” according to Brad Podiak, owner/operator of MetroWash.

A dirty garbage can not only produces an unpleasant smell — if you’re not careful, it can also become a breeding ground for maggots.

But one man’s trash has literally become Podiak’s treasure.

“A couple years ago I started researching cleaning trash cans cause it’s just not provided, especially in the Twin Cities market, very much,” he said.

Podiak sensed an opportunity. So he bought a truck and started MetroWash, a business based out of his Plymouth home that goes around the west metro cleaning people’s trash cans. 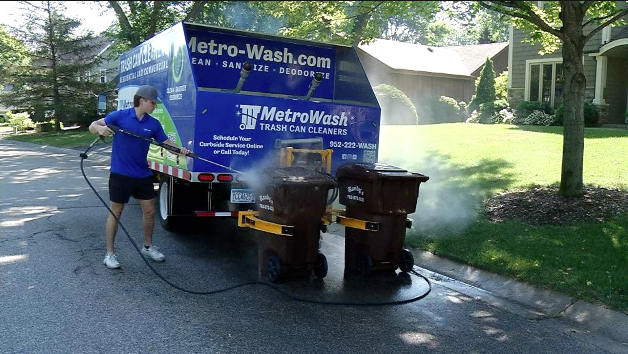 “Where we live around here there’s a lot of homeowners’ associations that require cans to be in garages full time where they can’t be in view from the general public, so your garage starts to stink or you grow maggots,” Podiak said. “And it’s just been a happy service.”

The truck uses two high pressure heads that spit out water heated to a temperature of about 200 degrees.

The entire process only takes a couple of minutes, and it leaves a filthy can looking — and smelling — like new.

“I joke, it smells like fresh laundry in your garage,” said Nancy Gnos, a client from Plymouth. “Or if you really want to be fancy, you’re smelling the lavender fields of France.”

Gnos is one of the 150 clients who have signed on since MetroWash started earlier this summer.

“It’s been fantastic,” Gnos said. “Especially the timing of summer and coming off some big holiday parties, it has been quite a treat, if you will. I can’t believe I’m saying this about my garbage cans.”

As the business gets off the ground, Podiak is mainly using word of mouth to advertise.

“It’s not a side hustle. It’s what I’m doing, really 24/7, every day,” Podiak said. “So marketing is huge as people don’t really know this service is available.”

MetroWash has several packages available, which include one cleaning a month for $30 a visit, or quarterly cleanings for $45 a visit.