Lantinen suggested ideas like taking another look at immigration policies or creating incentives for retirees to re-enter the workforce.

“I feel like we need a Rosie the Riveter character focused at retirees that says ‘we need you’ as the tagline,” she said.

Acoording to the U.S. Bureau of Labor Statistics, of the 100 million Americans currently not in the U.S. labor force, 42 percent are retirees.

Lantinen says her company implemented a 36 percent hourly salary increase last December, but still has trouble recruiting workers. As a result, she said her company has put expansion plans on hold.

“My business faces a dire shortage of workers. At 200 employees, we’re down roughly 100 from our optimal number of staff,” she told the committee, which besides Phillips also includes two other U.S. representatives from Minnesota, Democrat Angie Craig and Republican Jim Hagedorn. 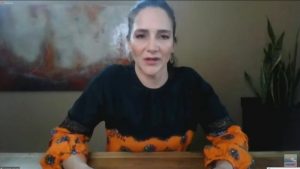 Maud Borup has been around for more than 100 years. Lantinen purchased the company in 2005, when it had $100,000 in sales. Today, sales at the privately-held company are up to $45 million. While the company’s headquarters is in the Twin Cities northwest metro, its manufacturing facility is in Le Center, about 60 miles southwest of Plymouth.

In August 2020, the cost to ship a standard 40-foot shipping container was approximately $4,300, she said. One year later Lantinen said that figure exploded to $30,000. She predicts the costs of goods could be 35 to 40 percent higher a year from now, largely driven by the worker shortage.

The Plymouth business owner also criticized the complex U.S. sugar program and the federal government for restricting sugar supplies, resulting in price inflation. She says it has resulted in American companies like hers paying twice as much as their global competitors.

“The world supply chains were simply not built to handle a near shutdown by early COVID followed by the rapid restart and the robust consumer demand that followed,” said O’Brien.

O’Brien says U.S. ports are more backed up than others globally.

“There is no magic solution,” said U.S. Rep. Phillips on the ongoing global supply-chain issues. “I was hoping we might come here today and find that magic wand that we could just solve this problem. The truth is, I didn’t hear one actionable solution that we could implement today to solve the problem. We have to make investments.”