Three months after the officer-involved killing of George Floyd, a large group gathered at Robbinsdale’s Lakeview Terrace Park to call for an end to police brutality and demand systemic change.

“George Floyd wasn’t the only one who was murdered. It’s ongoing,” said Alissa Pollard, a participant of Tuesday night’s event.

“Even if the police have protected your family, they’re not protecting all families,” said Toshira Garraway, who’s part of a group called Families Supporting Families Against Police Violence.

Garraway was one of several people at the event organized by “Robbinsdale for Racial Justice” to say they’ve had a family member have a violent encounter with police.

“My son’s father, Justin Teigen, was brutally beaten,” Garraway said. “Brutally beaten by the St. Paul police and thrown inside of a trash dumpster.”

The official account from police tells a different story, but unlike the George Floyd incident, there’s no video to show more of what happened.

“Unfortunately George Floyd lost his life, but that created a platform for the rest of the families to come forward with the truth about what’s really going on here in the state of Minnesota,” Garraway said.

The accusation, according to those gathered in Robbinsdale, is that police violence — especially against the Black community — is more prevalent than people realize. 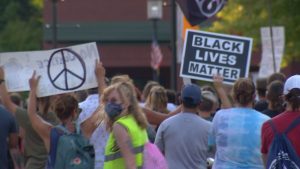 Protestors marched through downtown Robbinsdale on their way to the police station Tuesday evening.

It’s why they took to County Road 81 in the middle of rush hour.

The group marched their way to the Robbinsdale Police Department as a way to let city leaders know that they don’t want the same thing that’s happened in other cities to happen here.

“If folks don’t believe that they need to be shaken up, then they might not be listening to all of their neighbors,” said Pollard. “I think it’s important that we don’t go back to the old normal, especially before the pandemic.”

The new normal that the protesters strive for is a society free of violent run-ins with those charged with protecting and serving the community.

“My hope is that my child can leave out of my home and he will not be targeted or harassed because of the color of his skin,” Garraway said.