On the same spot where the Westphal American Legion stood for more than 70 years, there is now a 198-unit apartment complex that officially opened for business on July 23.

“Being right by the highway, it’s a great central location for anybody,” said Anton Bedeaux, the assistant property manager of Parker Station Flats.

Parker Station Flats is filled with many of the amenities people expect to find in a luxury setting.

The units have an open floor plan with two-toned cabinets, stainless steel appliances, and plenty of closet space in the master bedroom.

“We have one bedroom units, one bedroom dens, two bedrooms and three bedrooms,” Bedeaux said.

Outside of the units, the building has a fitness center, a large lounge area, an open courtyard with a fire pit, grilling stations, and an outdoor pool.

“I think this is definitely a breath of fresh air for the area, and the property kind of sells itself,” Bedeaux said. “As we bring potential prospects through here, they’re just in awe of what they’re seeing.”

Another rental option for Robbinsdale

The building gives people an opportunity to live in Robbinsdale who prefer leasing to home ownership. It’s an option that was limited until recently. 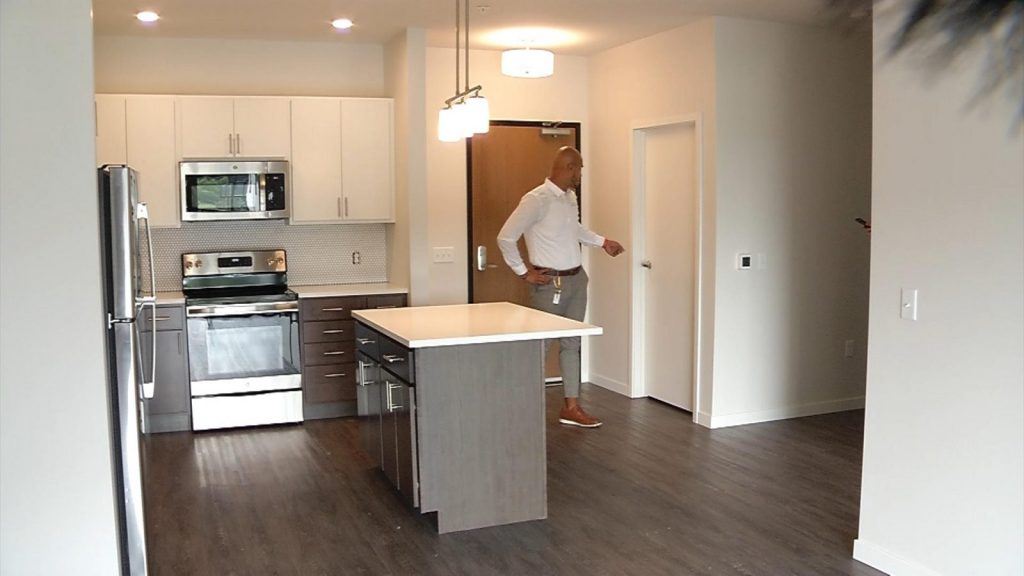 Anton Bedeaux shows off the kitchen in a unit at Parker Station Flats.

“We’re seeing a lot of people who are selling their homes right now, looking to downsize, just want something where they don’t have to keep up with the maintenance right now of a home,” Bedeaux said. “I think we’re getting a lot of prospects from that point of view.”

At the moment, Bedeaux says the occupancy is at 33 percent, but interest is growing.

“We’re still seeing a lot of traffic coming in, a lot of inquiries,” Bedeaux said. “People from all over, people coming out of the state, you know, doctors, nurses, you name it. We’re getting them.”

It helps that Parker Station Flats has a number of selling points such as the close-proximity to Hy-Vee, Crystal Lake and downtown Robbinsdale.

“It’s been very exciting. We’ve gotten a lot of good feedback from the neighbors here in the area too as well,” Bedeaux said. “Especially seeing it from where it started when we broke ground, to kind of where we’re at now. So it’s been great.”