The 2019-2020 school year has come with a unique set of challenges, as school districts had to learn how to implement distance learning on the fly due to the novel coronavirus.

But as this unprecedented school year winds down, parents of school-aged children are now in the process of figuring out their childcare options for the summer. 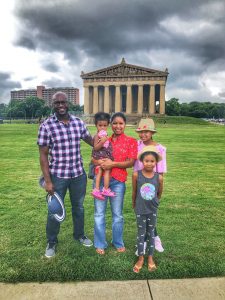 Pictured: Phala Austin with her family. Austin’s daughters, Mealea and Naomi, are currently registered for Kidstop.

Austin works as a dental hygienist at a clinic that’s been closed due to the pandemic. For the time being, she’s staying at home with her kids. But she expects to go back to work in June, and she’s counting on the availability of the Kidstop program when that time comes.

“Hopefully by this summer the virus starts to die down a little bit,” Austin said.

Just because Austin’s daughters are registered for Kidstop doesn’t mean that they’re guaranteed a spot.

“I don’t know if we’re going to be able to take all of our students that are currently signed up based on the restrictions or guidelines that are in place,” said Kristy Johnson, Kidstop coordinator.

An executive order signed by Governor Walz during the COVID-19 pandemic mandated schools to provide emergency childcare to health care workers and other emergency providers.

“I don’t know if the governor’s going to continue that we have to provide care to essential workers,” Johnson said.

That mandate complicates matters because they have to maintain a ratio of one staff member for every 10 students at their emergency care sites. If that order continues into June, they won’t have the space or staff available for the 1,500 children currently signed up for Kidstop and other summer programs.

“We may have to do a lottery,” Johnson said.

If summer programs like Kidstop can continue in the Osseo School District, they’ll look much different now that organizers have to worry about things such as social distancing and group size.

The district put out a note to parents that Kidstop has canceled field trips until the week of July 13. They’ll also have rules in place that limit class sizes to maintain social distancing. Staff would clean and disinfect surfaces in accordance with state guidelines.

Other district programs, such as summer camps, are still up in the air.

“We’re really hopeful that we’ll be able to run camps this summer,” said Sarah Heyer, enrichment program manager for Osseo Area Schools. “Most likely it will look a little different. We’re not sure what those guidelines and directions will be yet.” 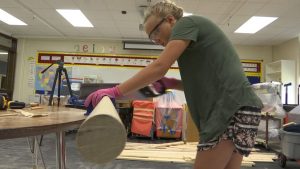 This shot from 2018 showcases a woodworking camp offered by the Osseo Area School District.

Heyer says the district’s mini camps usually serve about 1,500 students. They haven’t done much promotion yet for this summer’s camp offerings because of the uncertainty, but they still encourage families to register.

“If there’s a camp that somebody wants to participate in, it gives us a better idea for planning,” Heyer said. “So we know what people are wanting to do, and then obviously if a camp gets canceled, there’s a full refund so the money would come back to them.”

Brooklyn Park to Delay the Start of Camps

The Osseo School District isn’t the only entity that’s still figuring out what’s happening this summer. Normally, the city of Brooklyn Park runs day camps at four different locations. Those camps would begin a week after the completion of the school year and run through the second week of August. Each site could handle between 50 to 85 children per day.

“A lot of our families use us for summer child care,” said Jen Gillard, Brooklyn Park recreation supervisor. “A lot of the kids we get, we have them summer after summer.”

However, the summer of 2020 will be unlike any summer Gillard has ever seen.

When the coronavirus pandemic hit in March, Gillard said their summer camp registration was 65 percent full. But at the moment, she’s awaiting guidelines from the CDC and the American Camp Association on whether the camps can open, and what sort of programming they’ll be able to offer if they do open.

As it stands now, Gillard says the soonest Brooklyn Park would be able to open for modified programming would be July 6.

“I think it’s safe to say that there will be some sort of programming,” Gillard said. “I don’t know if it will be in person, if it will be online; I don’t know what the schedule would potentially look like. Really the only thing I know right now is that the soonest we could be open is July 6.”

In the meantime, she’s in contact with members of the state camping association to share ideas on programming, and she’s communicating to local families what could potentially happen this summer.

“It’s going to probably be a few more weeks before families have something to go on,” Gillard said.

Primrose Schools, a private preschool chain, finds itself in a similar situation.

Joe Piket owns two Primrose School franchises, one in Maple Grove and one in Brooklyn Park. The schools run a summer camp that draws 26 school-aged children between the two locations. 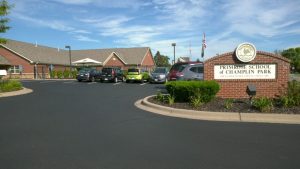 The Primrose School of Champlin Park in Brooklyn Park is one of two locations owned by Joe Piket.

“We usually have a pretty full summer camp with a lot of activities, a lot of field trips and stuff planned,” Piket said. “And that’s what we had going. We had it filled up back in February.”

Currently, the plan is to start the summer camp on June 8, but Piket says that could change, depending on what sort of restrictions or guidance the governor puts into place later this month.

“I kind of have to take this in two weeks chunks to figure out how people are gonna react to what’s happening, that’s how I’ve been trying to measure it,” Piket said. “So I’m not waiting for the governor to say anything in particular. I’m just waiting more or less to see what he does say and then kind of reacting from there.”

One thing Piket knows for sure is that if his summer camp does indeed take place, field trips won’t be a part of it. Even trips to local parks are likely off limits.

“I don’t know if I want to bring 30 kids to a park where it’s already got another couple hundred people at it,” he said. “That’s not going be viewed very well, especially if we’re still being asked to maintain distance.”

Like most organizations that offer summer camp programming, Piket hopes the coming weeks will bring some clarity on how to move forward.

“I guess for lack of any better answer, we’re starting as we had always planned to start on June 8. We’ll just have curriculum and everything ready to go then,” Piket said. “And if something comes out between now and then about, ‘Okay, you can’t have a group size bigger than this,’ then we’re really going have to figure out how to handle that and what that looks like.”

Hoping for the Best

For Austin, the Brooklyn Park parent who has her daughters registered for Kidstop, she’s hopeful that her daughters will have a secure spot for daycare. If not, she says her employer is understanding about her possibly having to stay home a little while longer.

“They’re actually very good with that. I emailed them and they understand,” Austin said. “I work with all females, and they have kids, so they know.”