Ray Smith liked bringing Osseo to life through his small replicas of downtown. He passed away on May 9 due to COVID-19.

A Talent for Woodworking

Smith moved to Osseo in 2015 and chose to live in the Realife Cooperative of Osseo because it had a workshop in the basement where he could continue woodworking. 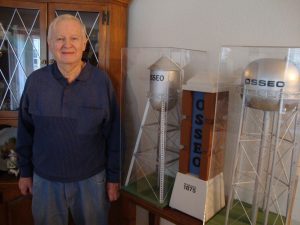 CCX News caught wind of his woodworking skills in 2015.

Smith made the two Osseo water towers that are currently on display in city hall. He also made a very detailed replica of the Realife Cooperative of Osseo.

“As he grew more frail, he started making wood toys for Children’s Minnesota,” said Hansen. “It made him happy to know each kid got to take home a toy.”

He also liked to visit Dean’s Supermarket to visit with shoppers and his son-in-law, Brian Hansen.

Smith kept on shopping, driving and woodworking until October. He had moved to Villa at Osseo when senior homes started restricting visitors. 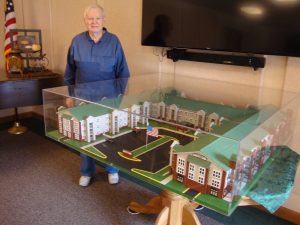 Smith with his Realife of Osseo replica.

“I visited every day until they stopped allowing it. Then I did window visits because he had a first floor room with a window,” said Laurel Hansen. “I gave him a cell phone and visited frequently that way, right up until the end.”

Hansen says the family was worried about the possibility of getting COVID-19 on top of her father’s other health problems. 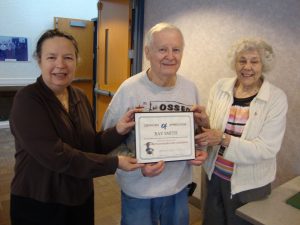 “It was shocking. He tested positive and three days later, he passed away,” said Hansen.

Funeral plans are currently on hold because of COVID-19 restrictions, but Hansen says the family has heard from many who interacted with her father and will miss him.

“He had a lot of friends at Dean’s. Everyone remembers him fondly,” said Hansen. “He was a great dad.”

Cherishing his memory will also be his son, Scott Smith, and his wife of 60 years, Lois, who lives at Steeple Point. The couple celebrated 60 years of marriage on a Zoom call in April.