The city of Osseo approved a physical and mental health plan for their police officers. Chief Shake Mikkelson says this is something he’s wanted to implement since starting as chief.

“I’ve been a police officer for 23 years,” said Chief Mikkelson in a city council meeting. “I’ve seen it all, done it all. Still, to this day, I have nightmares when it comes to certain issues I’ve dealt with in this job.”

The city of Osseo approved a plan that would give officers access to a gym as well as a therapist. 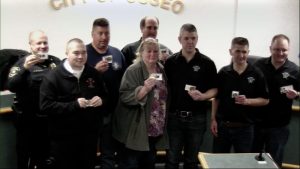 On a similar note, Osseo emergency responders also received Safe Call Now coins during this week’s meeting. The coins have the number for a suicide prevention hotline designated for first responders. Robbinsdale mom Carol Castle has handed out the coins to several local police and fire departments. She started the nonprofit, Wrestling for Life, after her firefighter son committed suicide.