“The girls program started actually last year,” said Osseo Girl’s Powerlifting coach Daniel Prody.   “We’ve been trying ever since we’ve had the guys program to get it going. It’s been a struggle though just trying to get bodies and get them in here, but once you get them in here they see how fun it is. They see themselves getting stronger and having a blast in the gym and it starts to be contagious, and more and more people come.”

That’s exactly what happened in year two of Osseo High School’s Girl’s Powerlifting Team. They went from two members in 2019 to seven in 2020.

“Power lifting is a predominately male sport, but the female aspect has been catching on in past years,” said Rylee Kara who placed 2nd overall at the state competition this year.   “So it’s been really fun just to see and prove that women are strong too.” 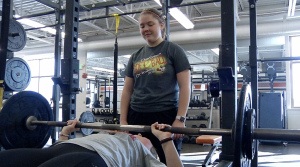 The women of the Osseo Powerlifting Team demonstrated their strength by winning the 2019 High School State Championship.

“Surprising to me because it was my first year. It was fun. It was unexpected,” said Loko, a junior who said she’ll definitely be returning to the powerlifting team next year as a senior.

Kara qualified for high school nationals, as well as the women’s state Olympic weight lifting competition on March 7th. “It’s the same kinda concept where you have to achieve a total for the meet with the two lifts to go to state and go to nationals,” she said.

The concept of a girls powerlifting team grew out of the speed, strength and agility program that Osseo High School offers each summer.

“Some of the numbers our female athletes are putting up in here are quite impressive,” said coach Ryan Stockhaus.  “Winning the state championship with a handful of the females on that team was very impressive in itself. I think he work ethic we see out of the athletes across the board is pretty impressive. I think that our female sports are really on the rise here.”