The city of Osseo is starting to think about what comes next for the playground at Sipe Park. The equipment is beginning to show signs of rust and wear.

One family that CCX News caught at the playground said they would enjoy seeing something new at the park.

“It has been here for awhile, but we have really enjoyed it,” said Megan Camacho, who was there with her young daughter. “It would really be nice to see a new playground here.” 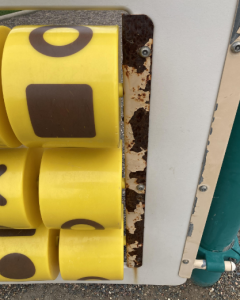 Some parts of the Sipe Park playground are starting to rust and show signs of wear.

The Osseo Lions made a $2,000 donation toward replacing the equipment, but that’s just a drop in the bucket.

Joe Amerman, community management coordinator, told the Park and Recreation Advisory Committee this week that the financial cost of a playground varies and is a sizeable investment. Playground equipment costs would likely start at around $50,000 and creating a destination playground would cost more than that.

City documents say funding for the playground equipment would likely be a combination of city funds, donations and grants. The park has been identified as something the city will include in its ongoing capital improvement plan.

Members of the Park and Recreation Advisory Committee recommended the city consider the cost and feasibility of a destination playground or a play area or skate park that could engage teens or tweens too.