The Osseo City Council approved a street reconstruction project Monday that not all residents are excited about.

The project impacts 60 homeowners on portions of 2nd Avenue Northeast and 3rd Avenue Northeast. It involves full replacement of curb and gutters and repairs of storm and sanitary sewers. The work also involves installing a sidewalk on the east side of the street. The sidewalk installation is the part that has rankled some residents.

The sidewalk will reduce the width of the street by three feet – from 35 feet to 32 feet. According to Lee Gustafson, vice president of municipal services for WSB, an engineering and consulting firm, 32 feet is not uncommon for city streets. Gustafson says some cities allow even narrower widths. In Plymouth, for instance, the city standard is 28 feet. Golden Valley is 29.5 feet. Crystal and Brooklyn Center are 31 feet and 31.5 feet respectively, said Gustafson.

Eight residents spoke out in opposition Monday night. One of them, Preston Kroska, told CCX News that he collected more than 50 signatures opposing the sidewalk.

“Our neighborhood is not designed for sidewalks,” said Kroska, who lives on the west side of the street. “We’re roughly 33 feet from the front of the house to the curbs. And for them to throw sidewalks in, you’re looking at around seven feet from the existing curb you’re taking out.”

Another resident, Deanna Burke, says snowbanks make it even narrower. Burke told the city council that if cars are on parked on both sides of the street, drivers are only left with 9 feet of clearance in the winter. Osseo does not have parking restrictions, with the exception of snow emergencies. 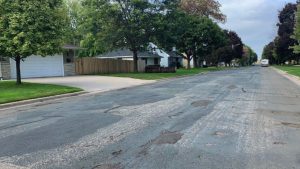 A Push to Improve Walkability

Osseo city leaders have favored the sidewalk in efforts to improve walkability.

Stelmach went on to say, “In issues where emotions enter the conversation, it can feel like if somebody is not agreeing with you right out of the gate, that it means that they’re not listening. And that’s entirely not true.”

Each homeowner will be charged a $6,720 assessment to help pay for about 40 percent of the $1 million total cost. City street and enterprise funds will cover the rest. Construction is expected to begin in May with completion in September.

“Perhaps another thing they [the city] could do, would be to put up signs that have been done in other cities that say ‘please drive as if your children lived here,'” Carol Nielsen told CCX News in opposing the sidewalk. “It’s a much more economical approach.”