Khalid Bakare might only be in third grade at Northport Elementary, but he wrote a book about bravery titled “Adventures of the Benson Family.” A teacher helped him craft the story, format it and illustrate it with pictures.

“I’m really proud that he took the time to do this as a third grader,” said literacy coach Jamie Groth. “I think he’s going to go really far with whatever he chooses to do. He has a good head on his shoulders and is a good kid.”

Growth says Khalid wrote the book all on his own. When she showed him what he was writing and how much he had written, she asked if she could help him.

“His eyes got big and he said I would love it,” said Groth.

So they worked together twice a week for 20 minutes a day for about five weeks.

The subject matter is more serious than you might expect from a 9-year-old too. The story is about the Benson family. The parents died, but passed down a special necklace to their three children.

“There are definitely some sentimental moments throughout it,” said Groth.

But Khalid sums up the story simply by saying it’s a story of bravery.

Khalid hopes his book will inspire others to be brave too. He will leave a copy at the school for future students.

“I hope they learn that if you want to be a writer in the future, always take ideas from your mind or some ideas from your friends. Also, be brave and think about things on and on, until you make a perfect book.”

Khalid plans to keep on writing. 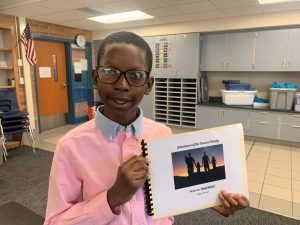