As COVID wears on, leaders in the health care industry discussed ways to resolve a worker shortage “crisis.”

The Minnesota Department of Employment and Economic Development hosted a virtual health care roundtable discussion on Thursday on the issue. Mary Turner, an ICU nurse at North Memorial Health Hospital in Robbinsdale, explained how workers are trying to handle the shortage.

“We’ve had like 37 percent leave our individual ICU as it is for various reasons, but it’s a slippery slope,” explained Turner. “As you get shorter and shorter, people are taking on more and more stress and they can’t do it you know. They need a change.”

Turner told a panel of state and company leaders that she believes more consistent schedules will help attract more workers.

“Scheduling is a huge dissastifier if it’s not right for the person,” said Turner. 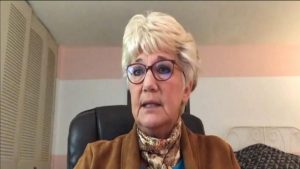 Mary Turner, an ICU nurse and president of the Minnesota Nurses Association

Health care leaders say better wages is another answer to the shortage. According to Minnesota Department of Human Services Commissioner Jodi Harpstead, the average wage in the caring professions is 27 percent below the average Minnesota wage. It’s 31 percent below if hospitals are excluded, she said.

“The prevailing wage in this sector makes it particularly vulnerable,” said Harpstead.

“So the responsibility for the vitality of these caring professions rests with all of us, all the taxpayers of the state of Minnesota,” said Harpstead.

Patti Cullen, president and CEO of Bloomington-based Care Providers of Minnesota, said of the 40,000 health care vacancies, at least 23,000 of those are in long-term care. Positions include not only nursing, but other areas of need like dietary jobs, cooks and housekeeping.

“Our answer is livable wages,” said Cullen. “We have a lot of new Americans in our positions. We have a lot of moms with young kids at home that have been working two jobs and can’t do it anymore, especially with distance learning, so we need to look very carefully at prioritizing the whole health care continuum because when we’re broke it ripples to everyone.”

Despite the difficulties in the profession, Turner wanted to point out to young people that a career in health care is rewarding too.

“To young people out there, there is no better profession than the caring professions because it is a job — no matter how difficult it is, how discouraged you can get — you can always say that you have a job where you’re making a difference and that’s huge.”