Visitors can see the photography show “Divine Animal” by photographer Willis Gilliard at North Hennepin Community College’s Joseph Gazzuolo Fine Arts Gallery. The show documents the summer of unrest in Minneapolis in 2020 as well as other events like festivals.

Gilliard bought his first camera when he was 24. Since then, he’s been telling stories with pictures. He enjoys photographing people in crowds, whether it was this summer during the unrest following George Floyd’s death or during a community festival. 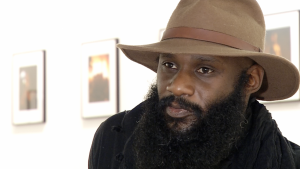 “I’m used to being in crowds and being next to crowds of people. So I’m fairly comfortable in that space,” said Gilliard. “I don’t really have to think too much about what to do.”

Gilliard enjoys the fluidity of the moment and the challenges being inside a crowd represents.

“If you see something going on over there and there’s like a bunch of people in front of you, you need to think about where you get a clear shot at these people,” explains Gilliard. “It’s a lot of running around.”

The majority of the images at the exhibit at North Hennepin are connected to the summer riots. But, there’s others too that are fascinating to see. If you can’t make it by the gallery, you can check out the 3D offering on the NHCC Fine Arts website. 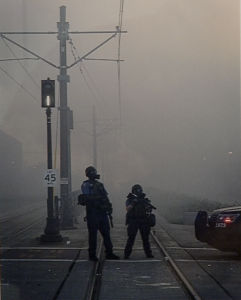 A Willis Gillard image captured this summer in Minneapolis.