Sometimes, the world of academia involves more than lectures and textbooks. Although it’s not often that you’ll find a college class involving hand-to-hand combat where one wrong move could get you tossed to the ground.

North Hennepin Community College sophomore Amari Townsend is one of the students who signed up for ‘Intro to Japanese Culture’ this semester. As part of that class, students are being introduced to the martial art known as Aikido.

“Typically when you think of fighting or anything like that, it’s more like punch hard, hit fast,” Townsend said. “This one felt more like navigating life.”

Mark Larson is the Aikido instructor at the Brooklyn Park campus of North Hennepin.

“I want [students] to have an authentic experience,” Larson said. “You know, I was very fortunate to live in Japan for a decade and also have been going back and forth now for 30 years, so I want authenticity. I also want them to learn more about their own mind and body.”

According to Larson, Aikido is unique in the sense that there are no competitions or tournaments, like in other martial arts.

“A lot of people will talk about [Aikido] being more of a defensive art,” Larson said. “Here in the West, it’s a lot of movement.” 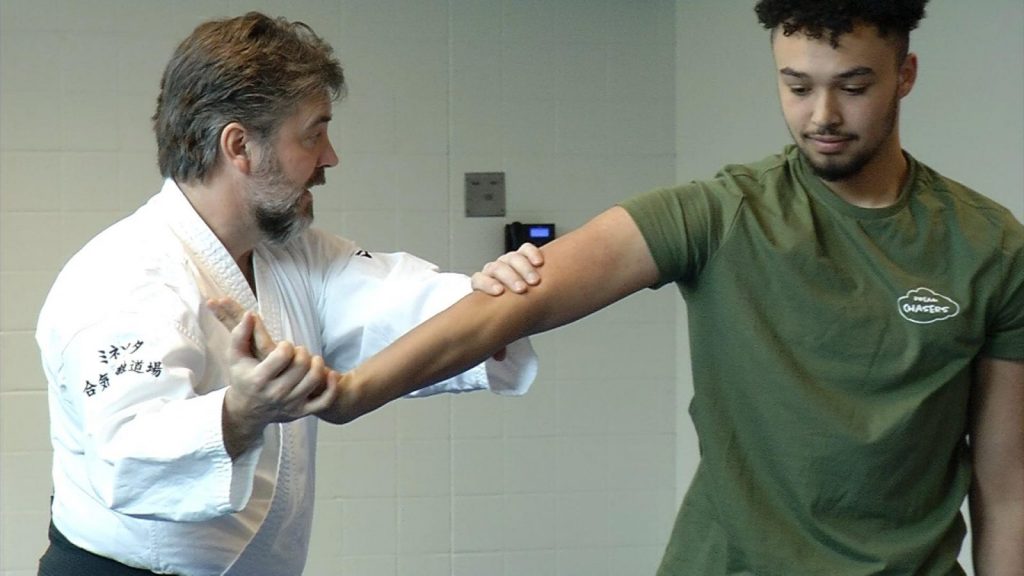 For 12 years, students could take Aikido as an official college course at North Hennepin.

Part of its appeal is that it can be learned by any person of any size, strength or ability.

It’s one reason why they had 50 students signed up for the class in the spring of 2020.

“And [the class] was just building,” Larson said. “You know, there were people on the waiting list and wanted to join the next semester, and then the pandemic hit and it just went, squash.”

Now, Larson is on a mission to bring the class back for the fall semester. He recently earned the title of ‘Shihan’ in Aikido (comparable to a Ph.D. level), and he’d like to pass that knowledge along to North Hennepin students.

“I think ultimately if you can integrate the things that you’re learning in class, like the focus, awareness, control, into your everyday lives, you’re going to benefit from it,” Larson said.

It’s a benefit that Townsend could already see during his limited time in the Aikido dojo.

“I feel like this class is good for self-defense, No. 1, but also more of getting a new perspective on things,” Townsend said.