Easter Sunday may be more than a month away. Yet when you’re in the chocolate business, it’s never too early to prepare.

The chocolate shop, located in north Minneapolis just across the Robbinsdale border, is a relatively new business that’s still working to build a customer base.

But over the last month, they haven’t been able to utilize one of their most important tools — their telephone.

“We don’t answer our phone anymore. We’re not able to,” Skifter said. “The phone calls come in day and night, so we’ve just basically turned off our phone.”

The calls aren’t coming from customers, but rather from people who’ve been victimized by a fraudulent website selling discounted shoes.

“We’re currently getting about 40 to 50 calls a day,” Skifter said.

When people search Google for “On Cloud shoes,” the ad for the fake website pops up. Dancing Bear Chocolate’s phone number is attached to it. 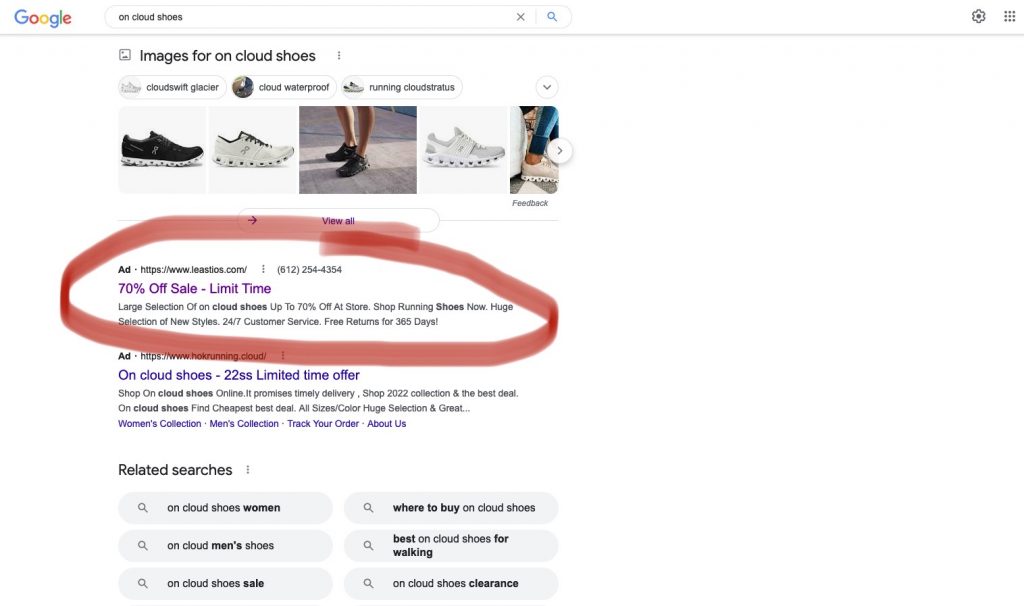 Dancing Bear Chocolate’s phone number appears next to the fraudulent Google ad when people search for “On Cloud shoes.”

Now, everyone who calls hears this message:

“Hello, you’ve reached dancing bear chocolate in Minneapolis, Minnesota. Unfortunately our phone number has been used in an online scam for On Cloud shoes. We are not involved in the sale of On Cloud shoes nor do we have anything to do with that ad. If you’re calling in regards to Dancing Bear Chocolate, we recommend that you send us an email at dancingbearchocolate@gmail.com, or leave a message here and we’ll return your call once we receive your message.”

The whole ordeal has been frustrating for the owners of Dancing Bear Chocolate.

“We’ve spent five years building our business on honesty, trust and delivering an incredible product,” Skifter said. “And for somebody to even come close to tarnishing our name is disheartening.”

CCX News contacted the Minnesota Attorney General’s Office and a spokesperson said that Dancing Bear Chocolate doesn’t have a lot of easy options. The options include:

“The last resort is to change our phone number, unfortunately,” Skifter said. “And for a small business, that’s a big deal.”

It’s a big deal because the phone number is on all of their merchandise and other forms of communication. Replacing all of that would cost money.

So for now, Dancing Bear Chocolate is asking people to email them. But ultimately, they just want their phone number back.

“Beyond tarnishing our name, that initial contact with the customer is via the phone,” Skifter said.