“This is one of the busiest streets here in Brooklyn Park,” she said. 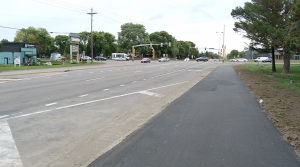 Students say it’s dangerous, especially when you’re waiting at the bus stop or trying to cross the street.

“This was just really unsafe for students and for the community,” said student Teresa Kemp.

Last year, Phi Theta Kappa, an honor society organization, came up with the idea to install a sidewalk as a community project.

“We choose the walk because we noticed that a lot of our students take the bus, and during the winter, they’d either be in the middle of the street, or they would be standing in the snow,” explained former Phi Theta Kappa President, Phi Xi Chapter Naomi Bennett.

After many meetings with North Hennepin Community College Officials and Hennepin County officials and Brooklyn Park leaders, the project was approved.

“We really stressed that this would be an asset to the school and the community,” said Kemp.

Construction started a few weeks ago. Now, there’s a multi-use sidewalk on West Broadway Avenue. Something student organizers say was crucial for the community.

“It feels good to actually be able to put something solid in the community, something that I’m proud to say that I was a part of,” said Coleman.