Senator Ann Johnson Stewart (DFL-Minnetonka) is not shy about her passion for pavement.

As an engineer and educator, she’s shared unique perspectives during her one term in the Senate. She is not running for re-election.

In her final farewell message she referenced that pavement passion.

“I know you guys made fun of me because I love infrastructure so much, and I was on to you when I talked about pavement and road factors, but I don’t care. I’m proud of that,” said Johnson Stewart in the speech on May 24.

Johnson Stewart is an engineer and an educator and is proud of that.

“I ran for Senate because I’m passionate about infrastructure and I was frustrated because no one seemed to be caring or paying attention,” said Johnson Stewart.

In an interview with CCX News, she referenced the recent water main breaks in St. Louis Park.

“We take infrastructure for granted,” said Johnson Stewart. “I tell my engineer friends that we are good at patching things together and making it work….but we are going to get to the point we can’t make it work any more.” 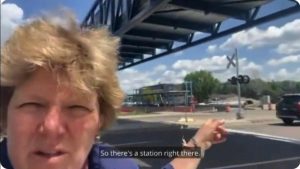 During her term, Johnson Stewart traveled the state and used Twitter as a platform to showcase infrastructure problems and solutions. She felt particularly moved by people in rural Minnesota who don’t have the funds to make infrastructure repairs.

“There are people who live in rural Minnesota who don’t have the property tax base to fix their sewer or their water so they have nobody to come to, but the state,” said Johnson Stewart. “As a member of the bonding committee, we had people pretty much begging us to help them because they have unsafe drinking water or they have sewage going directly to surface waters and that bothers me. It feels like everybody in Minnesota, everybody in America and everybody in the world should have clean water and shame on us that that’s not true here.”