The COVID-19 pandemic affects people physically, but it’s also hurting them in the pocketbook. A new study shows thousands of people who reside in northwest suburbs at risk of losing their homes due to the economic fallout.

“Families with young children are most at risk, and this is metrowide,” said Sarah Berke, project manager with Family Housing Fund, one of the groups that participated in the study. “More than half of all households with a child under the age of 18 have reported losing at least one adult employment since the crisis began.”

The Family Housing Fund teamed with Wilder Research to show the hardest-hit neighborhoods from unemployment.

“The caveat with our study is it’s only looking really at people who qualified for unemployment since the COVID pandemic began. So that means they were employed and recently lost their jobs,” explained Berke. 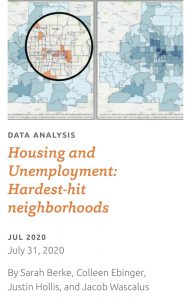 Researchers used ZIP codes to show areas reeling from the economic fallout. Several ZIP codes in the northwest metro stand out. Those include parts of Brooklyn Park, New Hope, Brooklyn Center and Crystal.

The study shows the 55443 Brooklyn Park ZIP code with more than 30% of residents vulnerable to housing instability.

Meanwhile, in the 55430 ZIP code, which is made up of Brooklyn Park and Brooklyn Center, 36% are at risk of losing housing, according to the study.

“In the northwest suburbs, we know that Brooklyn Center, Brooklyn Park are among the highest eviction rates in the state of Minnesota. So, that challenge has already been there,” said Nelima Sitati Munene, executive director of ACER.

ACER walks renters through the process of requesting rental assistance, because some tenants don’t have access to WiFi.

“We really don’t have the financial firepower to deal with a crisis this big. What we have been focused on is making sure that our residents and businesses have access to the resources,” explained John Sutter, Crystal’s Community Development Director.

Minnesota Governor Tim Walz put $100 million in CARES Act funding toward housing assistance. Renters and homeowners who have unpaid housing bills like rent, mortgage, or utilities will be able to apply for housing assistance through local administrators to help them get caught up on their bills. The state program will open to individual applicants in mid-August.

You can find out more information for rental assistance in Hennepin County here.