While many people are stuck at home to help prevent the spread of COVID-19, construction crews are hard at work in New Hope on the new aquatic park near city hall.

New Hope’s new pool will feature a variety of amenities, such as a 50-meter, eight-lane competition pool and a shallow water recreation pool. 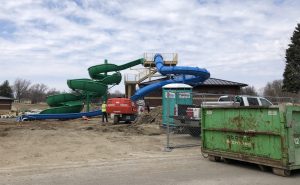 The water slides are now in place at the New Hope pool.

A notable addition for anyone who drives past the construction site are two blue and green water slides. The pieces arrived at the site March 13, and construction crews began the work to install them shortly thereafter.

“It’s more than just taking a big piece of plastic and putting it up,” said Susan Rader, New Hope’s parks and recreation director. “It’s constructing the slides on dry land. It’s putting in the step structures and everything, so it’s a process.” 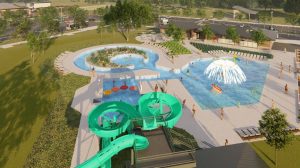 Rader went on to say that the COVID-19 outbreak hasn’t negatively affected the project, but she admits that it could at some point.

“Whether it’s boots on the ground, people that get sick, or whether it’s architects or the support people that are helping with that project,” she said. “But as of right now, [COVID-19] has not affected the pool project.”

While COVID-19 hasn’t impacted construction yet, Mother Nature has. Wet weather toward the end of 2019 stalled the project.

“That site is really susceptible to any sort of precipitation. It was tough last summer and last fall because of all the precipitation, so we are behind schedule overall on the project,” Rader said. “So they have been able to make some positive strides this spring because of the early nice weather, but the rain and everything is still a factor. And temperatures need to be above a certain threshold to be able to pour cement successfully.”

The hope is that the 50-meter pool should be complete by June 6, and the rest of the project finished by July 10. That’s assuming there are no further delays caused by weather and/or COVID-19.

It’s also worth noting that a boulder weighing an estimated 100,000 pounds was found by construction crews late last year. It has since been buried on site by the contractor.

Meanwhile, New Hope is going ahead with the plan that the pool will open as scheduled, so they’re actively looking to hire seasonal employees for various positions at New Hope Aquatic Park.

Anyone interested can call 763-561-5151 or email Tony Portesan at tportesan@newhopemn.gov. Phone interviews will take place April 4.