The New Hope Public Works Department recently had to replace two stop signs twice after someone plastered stickers and graffiti tags over the signs.

“It was a combination of markers and stickers. These were apparently stickers that could not be easily removed. So, there was some extensive work in replacement of these signs,” explained New Hope police Capt. Scott Slawson.

He says traffic sign vandalism is a serious concern since it can increase unsafe driving behaviors. The criminal act also puts pedestrians at risk, especially this time of year when winter weather can make it a challenge to see stop signs.

“If it’s an intersection where someone is used to traffic stopping and they’re not able to see that stop sign, yeah, it could be dangerous,” said Slawson.

The vandals caused about $200 worth of damage. Officials are still looking for the person or persons responsible. If you have any information about the crime, contact the New Hope Police Department. 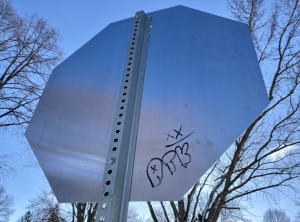 This graffiti tag remains, but New Hope has fixed the most visible cases of stop sign vandalism.