For 27 years, Tim Fournier has been a fixture at the New Hope Police Department.

“I think once I realized this is what I want to do, I knew I would end up back here,” he said. “This is my family. The officers certainly are, but the extended staff, I mean this has just been wonderful.”

Fournier has been New Hope’s police chief since 2011, but prior to that, he spent six years as a patrol officer and 12 years as a sergeant with the department.

Back in those days, he had hair. 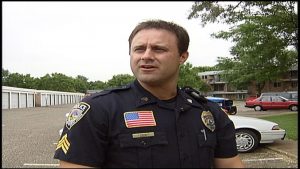 This shot from 2004 shows then-Sergeant Tim Fournier back when he had hair.

“Yeah a lot of us did. A lot of us started with hair,” Fournier said. “You’ll start to see these transitions. As it starts to go, you get rid of it.”

Now after 27 years of service to the city of New Hope, Fournier has decided to hang up his badge and transition to another chapter of his life.

While Fournier has had plenty of memorable days in his 34 years of public service, one that stands out the most is Jan. 26, 2015. That’s the night when a man with a mental illness opened fire at New Hope City Hall during a council meeting. Two officers were wounded that night while the shooter, Raymond Kmetz, was killed.

It was a traumatic event that prompted Fournier to provide his officers an opportunity to talk to a mental health professional. It’s a program called “Check Up from the Neck Up.”

“To do this job for 20 or 30 years, or even 15 years, it does wear you out,” Fournier said. “And you have to talk to people. The suicide rate among officers nationwide is really high. It’s really disturbing. And we’re working on ways to better that.”

Fournier’s last day on the job will be Sept. 30. As he leaves this position, he knows that the department will be in good hands.

In the meantime, the department has already begun the process of looking for the new chief. The city hopes to have that person selected by the end of October.