K-9 Kody has served with the New Hope Police Department for 8 years. He served his last shift on Tuesday night. Kody was deployed more than 1,200 times and played a big role in locating missing and vulnerable persons, locating narcotics and evidence, and finding suspects.

“He’s a great dog,”said his handler, Officer Miguel Robles. “He’s very social. He loves to be around people, likes to get treats and be petted. But he can turn it on and off very easily. So when it’s time to work, he’s a completely different dog.”

“There was a hostage situation in a neighboring city where a husband and wife were held at knife point and he had to extract the suspect,” remembered Robles. “[Kody] got stabbed, but was wearing a protective vest, which saved him.”

Kody will live out his retirement with his handler, Officer Miguel Robles, who purchased him from the city. 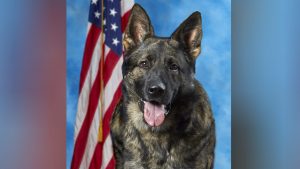