Demand for affordable housing remains strong. It is so strong that a new apartment building in Brooklyn Center is already full even before they officially open.

Sonder House is the name of the development. It’s located off Xerxes Avenue, on the former Jerry’s food site. The complex has two buildings, one is for the general public, and the other is for seniors. The first building is fully occupied before they open. The housing is affordable to people making between 30 and 60 percent area median income. Brooklyn Center officials and the developer are excited to see the high demand.

Not Your Typical Affordable Housing 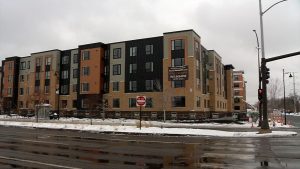 “It’s not public housing, and it’s not section 8 housing. It’s a particular kind of affordable housing where folks have to have a minimum income, they have to pay their rent, but that rent is capped. So, it’s kind of like a rent control building,” explained Meg Beekman, Community Development Director for Brooklyn Center.

The total cost for both buildings is around $70 million. The first building will open at the beginning of April.