The day after any winter storm, Minnesotans break out their collection of snow removal tools to dig themselves out.

Or in some cases, to do the digging on behalf of their neighbors.

“This is kind of the neighborhood crew,” said Ralph Pfannenstein of Brooklyn Park, as he shoveled a neighbor’s driveway. “You know, we get together, we do the people’s homes that aren’t home, try to get some of the driveways open so when they get home from work they have someplace to go.” 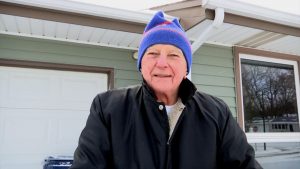 This scene played out all around the northwest suburbs, as several inches of snow fell Sunday night and Monday morning, forcing cities like Crystal to declare snow emergencies.

“Timing on this snowstorm was perfect,” said Crystal Public Works Director Mark Ray. “Didn’t start until 7:00 in the evening, ended around midnight, or a little after. Crews were able to get out and get most of the roads clear before the morning.”

Here are this morning’s snow totals at our climate sites! Many locations also saw up to 0.1″ of ice accumulation on top of the snow. 🥶

When it comes to residential streets, the goal of city crews driving the plows is simply to make the roads passable. Those roads are not treated at the same level as busy county roads.

“The county treats their roads at a much higher level,” said Ray. “They use a lot more salt than we do, which has obviously impacts on cars and infrastructure, and the environment.”

With more snow in the forecast for Tuesday, Ray says people should expect to see more plows in the next couple of days. He also hopes people can exercise some caution when it comes to plows or other vehicles on the road.

“As always, we would encourage people to slow down, give extra space between you and the vehicle in front,” Ray said. “Allow extra travel time, and if you do see plows, give them plenty of room to work. Understand they may need to back up or turn around to try to get the roads cleared as efficiently as possible.”

Meanwhile, whatever snow the experts can’t get to, people like Ralph Pfannenstein will take care of the rest.