Minnesota’s current budget and economic outlook revealed a much dire picture due to the COVID-19 pandemic. State financial experts now project a deficit of $2.4 billion for the 2020-2021 budget cycle. That’s almost a $4 billion change compared to the February forecast. You can see the full report from the Minnesota Department of Management and Budget (MMB) here.

Minnesota’s budget projection is based on new U.S. economic data in partnership with IHS Markit Consulting services. The unusual May outlook provides an updated glimpse at expected revenues and expenditures, which include any appropriations already enacted this legislative session. The last MMB forecast released in February showed a $1.5 billion surplus.

The data projects a recession during the months of July, August and September and 5.4 percent decline in real gross domestic product (GDP). Consumer spending accounts for two-thirds of U.S. GDP.

The forecast expects the coronavirus pandemic to peak, then dissipate in early summer. The GDP growth would then turn positive by the end of the year. Real GDP is projected to grow 6.3 percent in 2021, according to federal projections. The government projection calls for pre-pandemic levels to be reached in mid-2021, “but “GDP does not get back to where it would have been without the pandemic.”

“Some amount of economic activity is simply lost,” said Laura Kalambokidis, Minnesota’s state economist. “The shock to the U.S. economy from the pandemic is unprecedented in modern post-war history.” 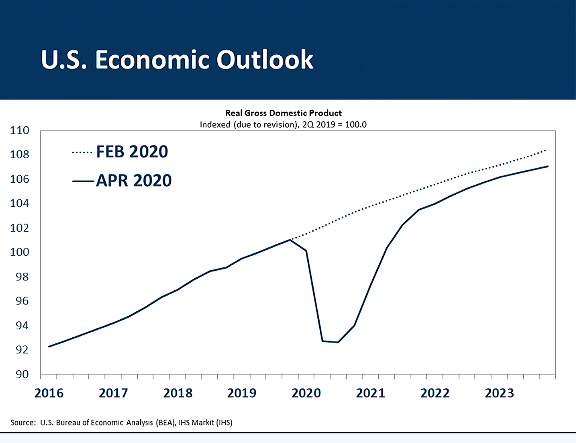 Kalambokidis notes that economic outcomes “will depend critically on the pandemic’s course, the prospects for an effective treatment and  vaccine, government restrictions on activity, consumers and businesses’ responses as those restrictions are lifted, and the impact of fiscal and monetary policies.”

It’s a startling fall from where Minnesota and the nation was in February. The state had a high demand for labor and low employment (3.1 percent in February compared to 3.8 percent nationwide).

However, since mid-March an unprecedented 600,000 people filed for unemployment benefits in Minnesota. The drop of total wage income in Minnesota is estimated to exceed the Great Recession as employers lay off workers and cut hours. Wage income is not expected to reach the pre-pandemic level until 2022, Kalambokidis said. 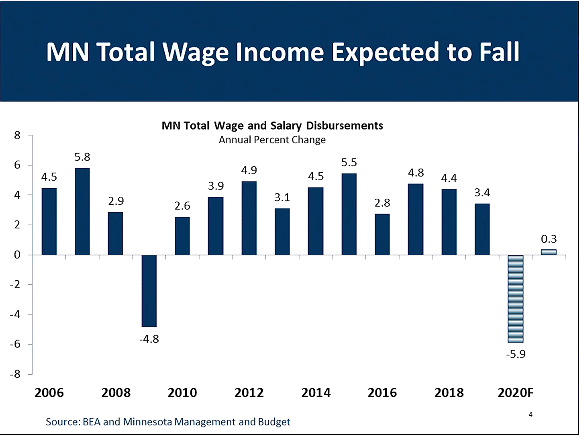 “Today is a Rainy Day”

According to MMB officials, projected spending is up $391 million from February’s forecast. That’s due largely to legislative action in response to COVID-19. Some of that spending may be reduced from federal aid, said Britta Reitan, state budget director.

“There’s a reason we call that a rainy day fund,” said Frans. “It’s for a rainy day. And today is a rainy day unfortunately.”

Frans says now is the time to use some of those funds. But not all those funds will be used immediately.

“Depleting these funds in this current situation is difficult because we know revenues are going to continue to decline over the remaining 14 months,” said Frans, referring to the 2020-2021 fiscal year.

But Frans says there’s a positive in this crisis.

“Our rainy day fund now is at the highest level in our state’s history,” said Frans. “We’ve entered this crisis with some budget tools to manage.”

Minnesota Governor Tim Walz says he will work with the legislature to balance the state’s budget, acknowledging it won’t be easy.

“States cannot run deficits,” said Walz, noting the federal level can. “These are decisions we’re going to have to make. We need to look out for one another. And we need to get ready to make some of those hard decisions, but with thoughtfulness in them.”