The Minnesota Air National Guard saluted the people on the front lines of the COVID-19 response by flying over North Memorial Health Hospital and Maple Grove Hospital on Wednesday. Those hospitals had a pair of flyovers. 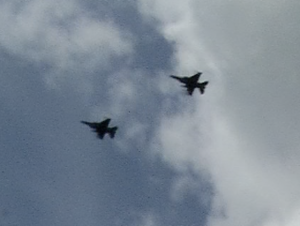 North Memorial Health Hospital in Robbinsdale along with Maple Grove Hospital are two of about 25 facilities that the two groups from the Minnesota Air National Guard flew over across the state to honor health care workers. Emergency responders and other essential workers doing their part in the COVID-19 response were also honored.

“These flyovers are our way of showing solidarity for those who have stepped forward to serve during this pandemic,” said Maj. Gen. Jon Jensen, adjutant general of the Minnesota National Guard. “This is a small way that we can salute those at the forefront of the COVID-19 response for their service and sacrifice.”

“Our crews must fly regularly to maintain their proficiency,” said Col. James Cleet, 133rd Air Wing commander. “This is an outstanding way to both train our aircrew and to recognize those in our community that are on the frontline working hard for the citizens of Minnesota.”

Flyovers are set to fly near local medical facilities in each community statewide. Other sites across the state will be flown over during future flyovers planned for later in the month.