The Crystal Police has a new canine on the force. 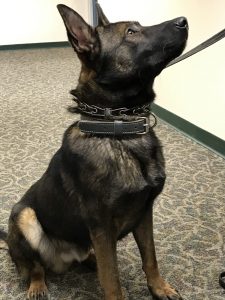 The dog’s name is Leo and he’s a German Shephard and Belgian Malinois mix. Officer Caleb Selin picked his new partner up last December. Currently, Leo is in basic training with the St. Paul Police Department. He is learning how to apprehend suspects and track people, but there is one thing he won’t have to do.

“Because of the potential for changing legislation as we’re seeing across the country, after he’s done with his basic training, he’ll go to narcotics school. But I think we’re going to leave marijuana out of it,” explained Lieutenant Pete Underthun.

There is a fundraiser for Leo this Sunday March 10th, 11 a.m. to 2 p.m. at New Hope Bowl. It cost $20 bucks to bowl. When bowling is done, people can head over to the Crystal VFW for lunch, raffle and prizes. Leo and his canine handler will Skype with the crowd at the VFW. They say the newest canine isn’t ready yet to be in public situations until his training is complete.