Back on Nov. 21, police were called to Maple Tavern where a woman claimed a bar employee assaulted her. No charges were filed. However, when an officer showed up, the establishment was still open to customers past it’s allowed closing time, a violation of its liquor license. Closing time was 1 a.m. since the establishment hadn’t yet received a 2 a.m. liquor license. Bars and restaurants were also technically supposed to be closed at 10 p.m. and restricted from doing indoor service on Nov. 21. That was the first day Governor Walz’s executive order took effect due for COVID-19 restrictions.

A Maple Grove police report noted several people, described as “highly intoxicated,” stumbling and falling to the ground outside the bar, including a man officials describe as the bar’s owner and manager. Over-service and disorderly conduct would also be violations of liquor licensing code. The city council discussed the issue at its meeting this past week, but couldn’t take any action because it must schedule a public hearing.

“They’re among the worst of the worst within a group of others,” said Maple Grove City Council member Judy Hanson. 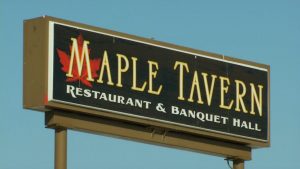 No date has been set for a future meeting on the matter. Failure to abide by city licensing code could result in license suspension or revocation and civil penalties.

“Over-service and the fact that the owner who was claiming responsibility when the police officer showed up is probably what disturbs me the most out of all of this,” said Maple Grove City Council member Kristy Barnett.

You can watch the full discussion here under item 5D.