“We stop here for lunch at least once a week,” said Dean Noren of the Maple Grove Fire Department.

He’s among The Lookout’s loyal group of customers. With an assortment of delicious wings on the menu, it’s easy to see why.

“These were nice and juicy today, and they had a nice spice to it,” Noren said. 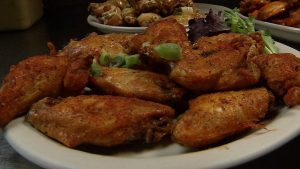 Chicken wings are one of the restaurant’s specialties.

“Wings are always a good food,” said Mike Kinnan, who owns The Lookout. “I think we have 20 different flavors.”

With that many options, there’s a little something for everyone.

But this is not a normal week. With Super Bowl LIV on the horizon, that number is going to skyrocket.

“I believe that because every year, the price of chicken wings goes up around the Super Bowl,” Kinnan said. “So the demand must be just as great.”

At The Lookout, they started taking pre-orders for Super Bowl Sunday chicken wings two weeks ago.

The palatable poultry seems to pair well with sporting events.

“It’s a little different than the chips and the dip. It has substance to it and it has a good flavor,” Noren said. “And if you’re into the buffalo and the hot sauces and that, I think it goes good with that and a beer [for] a football game.”

It’s a football game that hasn’t featured the Minnesota Vikings in 43 years. At least those hardcore Vikings fans can enjoy their favorite finger food while watching other teams have all the fun.